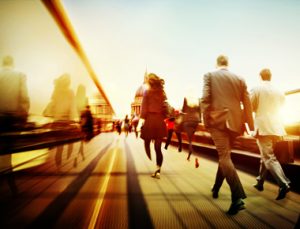 Despite technology advances and significant changes in how and where people work, ‘only a handful’ of new jobs coming to the market offer both decent salaries and the opportunity to work flexibly[1], reveal flexibility experts Timewise, following the first of its kind analysis of 3.5 million UK based job vacancies.2

This ground-breaking research – designed to help employers modernise their hiring practices, help recruit better candidates, and de-mystify the market for people who need a more flexible working pattern – has been funded by the Joseph Rowntree Foundation (JRF).

Timewise founders Karen Mattison MBE & Emma Stewart MBE today urge employers to ‘use the ‘F’ word’ when it comes to jobs, in a bid to attract talented individuals with key skills and experience.

14.1 million3 people in the UK are believed to want or need flexible work, equivalent to 46 per cent of the people in employment in the UK4. Yet just 6.2 per cent of quality roles coming to the market offer salaries of £20,0005 per year or more FTE (full time equivalent) AND some degree of flexibility: meaning that thousands of those who need flexible work – either on hours or location – face limited opportunities to progress their careers and earnings.

For the first time ever, this new research will enable candidates, as well as businesses, to compare flexible vacancies by UK region, role type and salary band.

Timewise co-founder Karen Mattison MBE who co-authored the research said: “The world of work has experienced a revolution – technology advances and recent legislations have facilitated a huge growth in flexible working, yet this has not been reflected in hiring practices. Businesses are missing out, as they consistently fail to realise just how important flexibility is to people looking for a new role. This often results in the best talent having to trade down, and take jobs way beneath their level of skill and ability. It’s time we reboot the way we recruit in Britain.”

CEO & co-founder, report author Emma Stewart MBE, also said: “It is time to stop talking only about the glass ceilings, and do more to understand the ‘sticky’ floors in UK businesses which are stopping talented people from progressing.”

Timewise carried out the in-depth quantitative research, analysing data from over 3.5 million job advertisements, across 122 national jobs boards, in the period July to December 2014.

The data analysis provides insight to business leaders on flexible hiring. By not offering flexibility in recruitment advertising, employers are cutting themselves off from a growing proportion of the candidate market, which includes some of the very best available talent.

Helena Morrissey CBE, CEO of Newton Investment Management and Founder of the 30% Club, said: “The Index shows that while companies have embraced flexible working for existing employees, their approach does not extend to making new hires. This seems inconsistent. If businesses could offer flexibility for new hires too, we might just see a much wider pool of female talent open up – benefiting businesses by alleviating the stubborn problem of too few women in the talent pipeline.”

Lynn Rattigan, Chief Operating Officer at EY, UK & Ireland, who is supporting today’s research said: “One of the major challenges facing most businesses across the country, is attracting and retaining the right people. Yet many organisations are restricting their search by applying the traditional concept of a 9-5 working week, which is fast becoming an outdated concept.

“There is a growing pool of talent, not just parents, who are looking for flexible roles that allow them to balance their professional and personal ambitions. At EY we are harnessing the power of flexible working, by empowering our people to decide how, when and where they work, and realising the competitive advantage it affords us. It naturally runs through our recruitment process from the outset.”

The research report for the first ever Timewise Flexible Jobs Index is brought to you in partnership with EY and also supported by Diageo and leading executive search partners6.

For more information or to arrange an interview:

[1]In this report, flexibility is defined as any job that is either advertised as part time or, if full time, is advertised offering at least one of these forms of flexibility:

2The research is based on the analysis of data from over 3.5 million job advertisements, across 122 national jobs boards, in the period July to December 2014.

3To note, nobody keeps data by salary band, but across all salary levels, the numbers of employees who want flexible work is huge – 14.1 million. This figure has been calculated by totalling the two statistics:

5 For the purpose of further JRF research commissioned through Timewise, a threshold of £19,500 is being used to define a quality job in terms of the minimum salary needed for people to live on. For this index of the jobs market, the proxy threshold of £20,000 is used in order to align with the way the recruitment industry uses salary bands. Less than 1% of analysed jobs had salaries between £19,500 and £19,999, and their omission has no impact on the overall percentage of flexible jobs (6.2%). Jobs at salaries of £200,000 or more are excluded from the analysis, as the majority of these jobs contained typing errors that meant they were incorrectly categorised.

Timewise (www.timewise.co.uk) is the UK’s first market place for candidates who want some flexibility on where and when they work.

Experts in flexible hiring, with 10 years of experience,Timewise is led by founders Karen Mattison and Emma Stewart, CEO, who have been made MBEs and won a range of awards for their work (see below).

Timewise runs multiple services designed to boost the number of jobs that are advertised with flexible working possibilities in the UK.

The Group’s four business divisions include:

2. Timewise Jobs (www.timewisejobs.co.uk), the UK’s first national jobs board exclusively for roles which are part time or open to flexibility, with over 70,000 registered candidates

Recognition for our work

Timewise’s work has been recognised by thought leaders, policy makers and the business community, including: Resolution Foundation, the Confederation of British Industry, the Greater London Authority, the Joseph Rowntree Foundation, the Cabinet Office, the Recruitment Employment Confederation, the Chartered Institute for Professional Development and the British Chamber of Commerce.

Organisations that have advertised jobs through us, or used our consultancy service, include EY, Diageo, ITV, Sony Entertainment, Macmillan Cancer Support, McDonalds, EasyJet and more.

Karen and Emma have been named ‘Breaking the Mould’ award winners by the Institute of Directors (November 2014), ‘Women Changing the Business World’ by the IoD’s Director magazine (February 2014) two of the UK’s ‘Top 50 Radicals’ by the Observer and NESTA (Feb 2012) two of the ‘most exciting social entrepreneurs to watch’ by Real Business Magazine and named ‘Small Business Heroes’ by Management Today (May 2013).