Proof at last: flexible working is for everyone 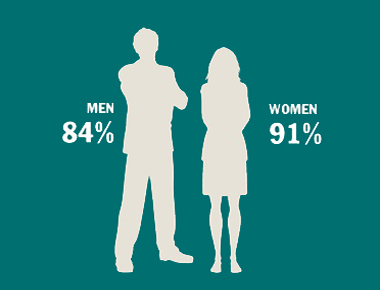 Having spent more than 10 years in the flexible sphere, I’m aware of the perception that it’s mainly women, and particularly mums, who want and need to work flexibly. But I’ve long been convinced that focusing on flexible working as a female issue isn’t necessarily serving women well.

So, knowing that the best way to encourage employers to open up a wider range of roles to flexibility would be to prove the demand, I commissioned an in-depth piece of research focusing on who wants to work flexibly and why in 2017. And the results were more clear-cut than even I was expecting.

Most people would work flexibly if they could

Our research revealed that a staggering 87% of the UK’s full-time workforce either work flexibly already or wish they could. The numbers are similar for men (84%) and women (91%), and they cut across the generations, with 92% of Generation Y, 88% of Generation X and even 72% of the baby boomers preferring this way of working.

For people who aren’t currently working, the numbers are equally high; 93% want to find a job that allows them to work part-time or flexibly in some way.

And the reasons vary too; it’s certainly not just about childcare. The most common one mentioned was to have more control over work/life balance (57%), followed by finding it generally useful or convenient (50%) and cutting down on commuting time (30%).

So there’s no room for doubt here: in 2017, flexible working isn’t just for mums. But the problem is that, despite this huge demand, only 1 in 10 jobs are currently advertised as being flexible at the point of hire. As a result, the 84% of male and 91% of female full-timers cited above have few flexible options if they want to move jobs.

The onus, then, has to be on employers to start thinking more broadly about who might want to work flexibly, and to change their hiring and job design practices accordingly. That means, for example, thinking creatively about how to design jobs to make them work on a flexible basis, and making sure that the technology is in place to support it.

We’re hoping that the research will lead to a shift in the way employers approach flexible working, and we’re keen to help make it happen. Our expert team offer training and consultancy services that are second to none; let’s work together to crack this issue and provide truly flexible roles for all.

To find out more about our consultancy and training services, contact info@timewise.co.uk