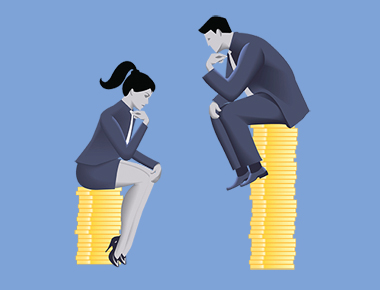 It’s nearly two weeks on from the BBC’s landmark reveal of their highest earners’ salaries, and the furore shows no sign of lessening.

Here at Timewise, we’ve been watching the issue unfold with great interest; and one of the things we have noticed is that there seems to be some confusion in the language. Specifically, commentators are repeatedly referring to the BBC’s issue as being about the gender pay gap when in fact, it’s actually about equal pay for the same job.

“Who cares?” you may be asking. “Isn’t it enough that everyone’s talking about women’s pay at last?” Well, no. If you’re looking to fix a problem, you need to be clear about what the problem is. So here’s the difference.

The issue at the BBC is that men and women who are doing what appears to be the same job are not being paid equally. For example John Humphreys, who presents the Today programme on BBC Radio 4, is paid between £600,000 and £649,999, whereas his co-presenter Mishal Husain earns between £200,000 and £250,000. It can never be a perfect comparison, as both individuals do other work for the BBC, but it’s not difficult to argue that the figures indicate an overall difference between what men and women are paid for the same or similar work.

By contrast, the gender pay gap is about the average pay of men and women within an organisation. In simple terms, that means adding up all the men’s pay and dividing it by the number of men, then adding up all the women’s pay and dividing it by the number of women, and then calculating the gap between the two. Whilst the BBC is likely to be struggling on both fronts, it’s this gap, the real gender pay gap, which organisations of over 250 employees are being asked by the GEO to report on by April 2018.

And the reason it matters is because the two issues need tackling differently. I don’t have space to explore the reasons behind the equal pay problem here, and much of it falls outside Timewise’s remit (though we’re happy to go on record and say that we don’t think it’s the women’s fault for not asking enough.) It’s going to require a root-and-branch rethink at senior level, not just at the BBC but throughout the commercial media sector.

But when it comes to the gender pay gap, we do have the answer. As I wrote in a recent article on the topic, the introduction of flexible working can make a real difference to an organisation’s ability to close the gap. In particular, there is a direct correlation between the thinning out of opportunities to work part time or flexibly up the talent pipeline, and the thinning out of women in more senior roles. This has a huge impact on the gap between average male and female salaries, so making flexibility available at a senior level is critical.

And the Women and Equalities Committee agree, saying in a 2016 report: “A large part of the gender pay gap is down to women’s concentration in part-time work which doesn’t make use of their skill… Old fashioned approaches to flexibility in the workplace… are stopping employers from making the most of women’s talent and experience.”

For organisations wishing to close their gender pay gap, then, addressing flexibility is a good place to start. Amongst other things, that means creating a supportive culture, designing jobs to be intrinsically flexible and ensuring that there are flexible routes for career progression. And it means being willing to advertise jobs as being open to flexibility at the point of hire, as championed by our Hire Me My Way campaign.

So while we can’t help Tony Hall out with his news-dominating equal pay problem, we’d be happy to help him and other leaders across the UK tackle their gender pay gap. We’ve got years of experience of delivering innovative solutions through a range of consultancy and training programmes; let’s get to work and close the gap, together.