PRESS RELEASE: This is what part-time Britain looks like

The 2019 Timewise Power 50 Awards provide a snapshot of what modern work in Britain is truly like and challenge the belief part-time work can’t mean ambitious, can’t mean highly successful and can’t mean senior. 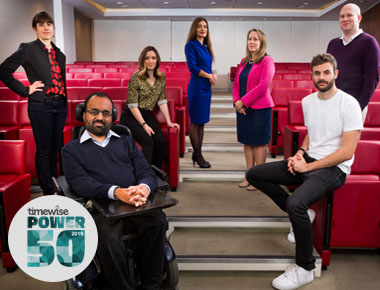 Timewise unveils its 7th annual Timewise Power 50 Awards – featuring 50 people in top UK jobs who achieve EVERYTHING they do, part-time or flexibly

Tuesday 26 February, 2019: Timewise the flexibility specialists today unveil their fresh list of 2019’s 50 most powerful people working part-time and flexibly in the UK.

The 2019 Timewise Power 50 Awards provide a snapshot of what modern work in Britain is truly like and challenge the belief part-time work can’t mean ambitious, can’t mean highly successful and can’t mean senior.

From top engineers, to security chiefs and West End stars – this year’s list proves that part-time and flexible working has moved beyond being a concession for parents in office jobs, to the way people are working in all kinds of jobs and for all kinds of reasons.

This year, for the first time, the list celebrates two businesses that are entirely structured on four-day weeks (see below for case studies). 3 in 5 people in the UK now believe that a 4-day week ‘could become the new normal’, according to a poll commissioned by Timewise to launch the new list1.

Whilst usually dominated by mothers looking to fit work with family, this year’s Timewise Power 50 Awards, which is backed by EY, Dixons Carphone, Lloyds Banking Group and Diageo, features winners stating a range of reasons for needing flexible or part-time structures – in addition to or instead of those just citing childcare. These include:

Some of our winners:

In a first for London’s theatre scene, Charlene and Jenny shared the performance of an ensemble role in 42nd Street, at the Theatre Royal Drury Lane. Charlene and Jenny developed their arrangement after Jenny covered Charlene’s maternity leave. On her return, Charlene contacted Jenny over Facebook about splitting the 8-show a week role as a potential job share (they had never met in person). They agreed a pattern that allowed Charlene to spend more time with her son Jenson, and Jenny to take on teaching work at top dance schools such as Bird College and Italia Conti. Jenny also chose to support Charlene to: “‘pay it forward’ for female performers everywhere – who should be able to enjoy the continuation of their career after children”.  The show has just closed and both are now moving onto their next projects.

As the head of BCLP’s Brexit taskforce, Chris is a leading expert and media commentator on the subject. This part of his role sees him working with clients from almost all sectors of the economy to prepare their Brexit strategies, from scenario and contingency planning to advocacy positioning. He also advises on large-scale competition and trade law investigations in the EU and UK, and is the lead partner on a number of multi-million pound competition damages actions. Chris works part time so he can focus on two personal priorities: looking after his 2 year-old daughter and writing musical theatre. His recent hit, Brexit the Musical, was shown at the Edinburgh Festival and is now in development for a nationwide tour.

21212 is Edinburgh’s only Michelin starred restaurant with rooms, and is becoming equally well-known for its innovative approach to working. Professional kitchens are stressful, high pressure environments, and drug, alcohol and mental health issues are all too common. It’s for this reason that 21212 Edinburgh’s co-owner and chef, Paul Kitching, has decided to operate on a four day working week. His staff will be paid the same as they were before the change, but will have an extra day each week to socialise, exercise, spend time with family and friends and, ultimately, enjoy a better work-life balance. Paul believes this will give his team the brain-space to be more creative and encourage a new generation of chefs to enter the industry.

THE MIX I Research agency decreasing pressure on staff by overhauling the working week
Founded in 2012, The Mix is a research agency with a focus on understanding human behaviour. It was this focus that made owner and founder Tash Walker acutely aware of the pressure felt by staff and clients to balance their workload with the rest of their lives. Tash therefore took the decision to move the agency to a four day working week, giving staff every Friday off whilst keeping them on full pay. Figures from the first year of this new arrangement suggest that revenues are up by 57%, client numbers up by 100% and staff absences down by 75%. Tash and her colleagues have subsequently produced a white paper, Four – What is it Good For?, to share what they did, how they did it and why it’s proved successful with other forward-looking organisations.

Timewise co-founder  Karen Mattison, MBE, comments: “The Timewise Power 50 List has become a beacon of hope – shining a light on what’s possible in the working world. What’s clear this year, is that the so-called quiet revolution in the workplace has suddenly found its voice.  The idea that part-time work is a ‘nice to have’ concession made for mums, has gone. With five generations all working alongside each other in the modern workplace, and working flexibly for all kinds of reasons, we are seeing a shift from individuals ‘making it work somehow’  to employers adjusting the structures and workings of their organisations to fit this societal shift. Whether that’s by offering more hot desking or re-scheduling the pattern of the business to offer shorter weeks. When we first started publishing our annual Timewise Power 50 list in 2012, we aimed to prove it was possible to work top jobs less than full time. This year, as every year – the case is proven.  Now it’s time to help employers prepare for what the future workforce will want, and to ensure the market offers fair opportunities and easy access to part time and flexible workers.”

Lynn Rattigan, EY’s Chief Operating Officer in the UK & Ireland, says: “The career stories of those listed in the Power 50 clearly demonstrates to employees and employers just what is possible whilst working flexibly.”

“In EY’s experience, empowering our people to decide how, when and where they work helps them to achieve both their personal and professional ambitions. It can help to boost productivity, improve retention and develop employees with extra skills and experiences outside of the workplace.”

“A flexible workforce will be critical in the workplace of the future and our Power 50 role models are leading the way.”

Fiona Cannon OBE, Group Responsible Business, Sustainability & Inclusion Director, Lloyds Banking Group says: “We are delighted to be supporting the launch of the 2019 Timewise Power 50, to celebrate successful individuals who are working in an agile way and creating a path for others to follow.  At Lloyds Banking Group, we recognise that today’s business environment is changing dramatically, driven by changing consumer expectations, technological advancement, rapid globalisation and new societal values.  New models of work are required to respond to this changing environment.  Building agility into every aspect of how we do business is helping us create a workforce which can adapt quickly to change.”

Assad Malic, Group Director of Corporate Affairs at Dixons Carphone says:
“While judging I was struck by the breadth of experience of the nominees, the different stories behind their flexible working decisions and by their incredible achievements – our congratulations go out to all this year’s finalists. We know that having a flexible culture helps to recruit and retain talented colleagues who bring energy and innovation to our business, while also acknowledging their important commitments outside of work. This is why we’ve been introducing more flexible options across all our functions for some time now – we believe this is the right thing to do and will lead to happier colleagues, happier customers and a happier business overall.”

James Dowling, who is responsible for Talent Engagement Europe at Diageo says:
“At Diageo we know that the success of our business depends on the success of our people and we’re firmly committed to creating an environment where all our employees feel included and able to perform at their best in all aspects of their lives. We are delighted to be supporting the Timewise Power 50 once again, which plays a vital role celebrating the incredible hard work and achievements of those individuals in the UK who make flexible working work for them. Congratulations to all who entered.”

For more on how the awards are structured and judged, please see below 2.

1  ICM Unlimited interviewed a representative online sample of 2,053 adults aged 18+, between 19 & 21 December 2018. Interviews were conducted across the country and the results have been weighted to the profile of all adults. ICM is a member of the British Polling Council and abides by its rules. Key findings:

2 Structure of the awards and more info on the judging process – the judges were tasked with building a distinct list of 50 individuals or pairs of people who demonstrate significant achievement as flexible workers in the broadest sense – from those succeeding in part-time hours or as a job-share team, returning to the workplace after a significant career break, through to those who have used their own start-up status to determine their own flexibility.

And the following two criteria against the specific categories listed:

Timewise is a multi-award winning social business, working to unlock the flexible jobs market in the UK. We share market insights on flexible working and flexible hiring, deliver training and consultancy to help businesses attract and develop the best talent, and conduct research such as our annual Flexible Jobs Index.

We also run Timewise Jobs, a national jobs board for roles that are part-time or open to flexibility.

Timewise is led by award-winning founders and Joint CEOs, Karen Mattison and Emma Stewart. They have been listed as two of the UK’s leading radical thinkers by the Observer newspaper and Nesta; named ‘Small Business Heroes’ by Management Today magazine and ‘two of the key social entrepreneurs to watch’ by Real Business magazine; and are winners of the Institute of Directors’ Women Changing the Business World award, following nominations from the UK public. In 2010 they were made MBEs for their services to social enterprise.