10 ways to use flexible working to attract more senior women

Skip the excuses. The reasons cited for not having more women on boards, as told to a government survey, are both out-of-date and missing the point. Instead, the way to deliver female progression is to offer flexible working. 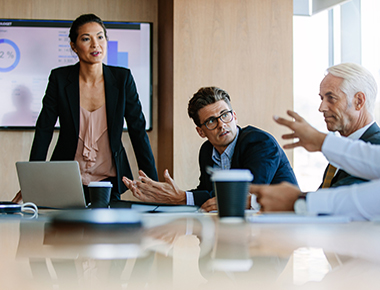 The publication of the 10 worst excuses for not appointing women to FTSE company boards, taken from the government-backed Hampton-Alexander Review, made me more amused than annoyed. While clearly it’s not great that people believe things like “All the good women have already been snapped up” or “We have one woman already on the board… it’s someone else’s turn”, I’d rather have views like these out in the open, and up for debate, rather than hidden under the surface.

But these people are increasingly out of touch, and their beliefs far less common. The value of having more senior women in the workplace is now widely accepted; what people struggle with more, is how to achieve it. So rather than spend time challenging out-of-date views, I’d rather focus on the fact that there’s a relatively straightforward solution to this issue: more, better flexible roles.

And as we all love a list, here’s my personal (and less contentious) top 10, setting out how to use flexible working to deliver more senior women:

Be open to exploring flexibility. Lead from the top; show that you value people’s lives outside work by leaving loudly, Train line managers in how to discuss flexible working with their teams. Instead of asking ‘Why?”, start asking “Why not?”

2. Be proactive about offering flexibility

Don’t wait to be asked. Make it clear to your staff that flexible working is an option for everyone, whatever their personal circumstances. Share stories of people who are working flexibly for a variety of reasons, so others understand that they can, too.

3. Offer flexible options at the point of hire

There are many extremely talented, ambitious women out there who need a degree of flexibility in order to thrive in and outside work. By offering flex up front, you’ll widen the pool you have to choose from – and attract some brilliant candidates.

4. Design jobs with flexibility built in, not tacked on

Making a job work on a part-time basis doesn’t mean giving people Fridays off and expecting the same outputs. Instead, think about where, when and how much someone needs to work to deliver a role, then design the flexibility to suit.

5. Invest in the technology to support remote working

Being able to work from home, or leave early and log on later, is hugely beneficial for employees with other responsibilities. Skipping the commute takes the pressure off deadlines such as school pick-up time, and frees up extra time needed for things like medical appointments.

Part-time isn’t the only way to work flexibly, and it’s worth considering whether other patterns could work for your organisation. Options such as compressed hours, annualised contracts or job shares might be a better fit for senior women or those on the way up.

If people can see a flexible route upwards, and get support from others who have been there and done that, they’re more likely to stay. Ask your more senior flexible workers to mentor to those coming up behind them, and create a forum for conversations to happen.

Typically, client, teambuilding or networking events take place after work, which can make it harder for parents or carers to attend. By offering a range of options, or alternating days and times, you’ll get a more inclusive attendee list.

9. Set up a returner programme

Supporting women back into the workplace is a sure-fire way to get talented, experienced staff and demonstrate your commitment to female progression. Take a look at these guidelines for setting up a returner programme which we co-created for the Government Equalities Office.

10. Face up to unconscious bias

Hopefully no one in your organisation holds the views that were given to the Hampton-Alexander Review. But left unchecked, people do have a tendency to recruit others who look and sound like themselves – and right now, that’s likely to deliver more board-level men.

To find out more about how flexible working can deliver improved female progression, call Karen on 020 7633 4420 or email karen.mattison@timewise.co.uk