The real reasons behind the gender pay gap 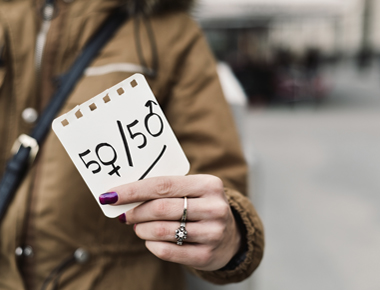 The gender pay gap continues to be a regular staple of the news agenda.  And many companies, when publishing their data, attempt to put a context around the fact that they have one. In some cases, they  even try to explain the gap away, suggesting that it isn’t so much a problem as a fact of life.

However, research has shown that there are four key reasons why the gender pay gap exists. And for three out of the four, there is a relatively straightforward solution: get better at flexible and part-time working.

Here we explore what the research is telling us – and what employers who are keen to narrow their gap can do about it.

Reason 1: There are more men in senior roles than women

It is certainly true that there are more senior men than women in the workplace as a whole, and as senior people tend to be paid more than junior people, this has a negative effect on the gender pay gap. However, that doesn’t mean that the disparity cannot be tackled.

At the heart of the problem is an assumption that senior jobs ‘naturally’ require long hours and constant availability, and so cannot be done flexibly or part-time. This is largely due to the 1950s pattern of men going out to work and women being at home to support them – enabling men to focus on work to the exclusion of everything else in life. And it has been exacerbated in many sectors by globalisation and always-on technology, which have extended the working day to 10 or 12 hours.

Solution: Design senior roles to work for all

In the 21st century, this pattern of working is no longer fit for purpose. Instead of assuming that senior roles can only be carried out by someone with no non-work calls on their time, or that senior women need ‘accommodating’ to succeed, the roles need to be designed for the workforce we have now.

That’s a workforce in which 90% of workers either already have, or say they want, flexible and part-time working. A workforce that includes men and women, parents and carers, all of whom want or need to work, but few of whom can do so to the exclusion of everything else.

Employers come up with a range of reasons why flexible and part-time working are impossible in senior roles. “The clients might need you on your day off”; “Your team can’t manage without you”; “You’re the only one with the expert knowledge”; “You’d miss out on too much information if you worked part-time”. The fact is, none of these have to be a barrier. All jobs can be designed differently, with a little imagination and a lot of collaboration.

Here, the argument is that women ‘choose’ to care for children, so they naturally end up in part-time jobs, below their skill levels, and with fewer progression opportunities.

It’s true that the gender pay gap increases after childbirth, and that, by the time their first child is 20, women’s hourly wages are about a third below men’s. And it has been estimated that gender differences in rates of part-time and full-time paid work account for more than half of that gap, especially among the highly-educated.

However, this is based on a similar assumption to the first reason: that is, that part-time jobs are ‘naturally’ less senior, and so are automatically downgraded. And positioning part-time work as women’s ‘choice’ not only suggests that women are responsible for their lower earnings, but also takes the pressure off employers to do anything about it.

It’s also true that there are societal expectations at play here, with men in the UK finding it harder to ask for part-time work. In the Nordic countries, where government initiatives have actively tackled expectations of gender roles, change is much faster.  Yet, we know that men in the UK do want to work part-time; research has shown that over half of younger fathers would take a pay cut to work less and spend more time with their family.

In the absence of Nordic-style government intervention, employers who want to close their gender pay gap need to overcome the cultural biases which make it hard for men to opt for part-time or flexible working. And part of the solution here is to make part-time roles more attractive to career-driven people.

Reason 3: Women choose to work in low-paid roles and sectors

We know that many of the more poorly-paid occupations are those traditionally done by women, requiring skills traditionally regarded as ‘feminine’, such as people skills and caring skills. So women ‘choose’ to work as nurses, teachers, or shop assistants, while men ‘choose’ to be surgeons, construction workers or engineers. The issue here is that we undervalue traditionally female skills – and that will take a while to change.

But there is also a perceived wisdom that women choose low-paid occupations because they offer more flexibility, or are more family-friendly. Again, the perception that it is a choice to prioritise children over paid work, rather than being due to a lack of viable alternatives, positions the gender pay gap as a fact of life, and releases employers from responsibility for changing it.

Solution: Open up all sectors to part-time and flexible working

As we have found with the other issues cited above, flexible working holds the solution.

Opening up traditionally male sectors and occupations to flexible working would encourage more women to work in them, and more men to switch to working part-time. And building flexible progression into these roles would allow part-timers to develop their careers in a more equitable way.

Reason 4. Women are paid less than men for the same role

In contrast, the equal pay issue is one of discrimination: paying men and women different amounts for doing the same job. So while this does feed into the gender pay gap, it isn’t the same thing.

We don’t need a flexible working solution here; the law has been clear that men and women should be paid equally since the Equal Pay Act of 1970. However, it is worth pointing out that discrimination sometimes arises from the same assumptions about women’s roles that are identified above.

It’s clear, then, that cultural bias, societal assumptions and a lack of progress in workplace design all contribute to the gender pay gap. And we at Timewise know better than most that flexible job design is the key to bringing about change.

To find out about our training and consultancy services that could help you tackle your gender pay gap, please call 020 7633 4444 or email info@timewise.co.uk